OBIEE - Power to the people - joining the unjoinable

In normal life Administrator creates the model, including the joins between objects and the users use them. From time to time the users require things that are not covered by the model. I see 3 option in such case:
1. Update the model - the proper way.
2. Allow the user to access Direct database request (I've seen System admins that told me they would rather drink cyanide).
3. Use "create Analysis from simple Logical SQL" - this topic.

Lets see an example. In my model I deleted the join between Customers table and Sales one: 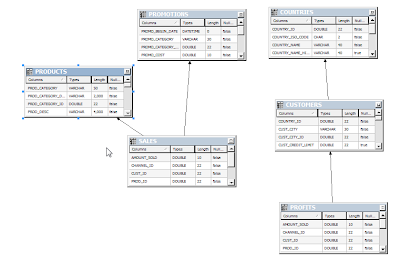 What I intend to do is to create 2 separate queries and join them in a third one.

I created the first analysis: 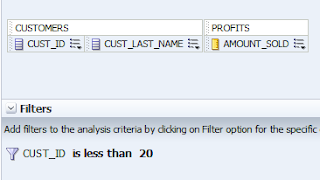 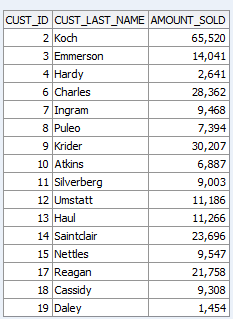 Naturally I will have an error if I try to add a column from Sales table: 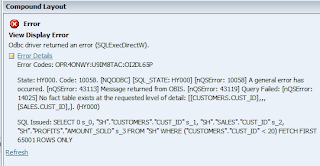 At the Advanced Tab we can press "New Analysis" to get the query:

I copied the SQL and did the process again with the other query: 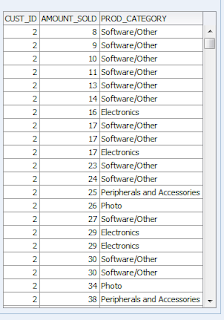 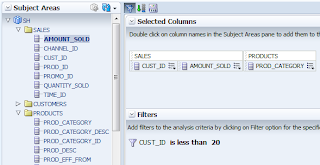 Now I have 2 queries:

I can create single query from both. For example:

(Don't bother too much with the new names, OBIEE will convert them to saw_x if you do it this way. See Remarks at the end.) 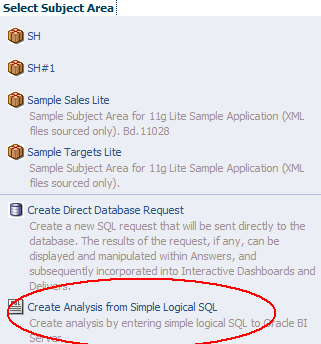 This is working. I joined the 2 results as an end user: 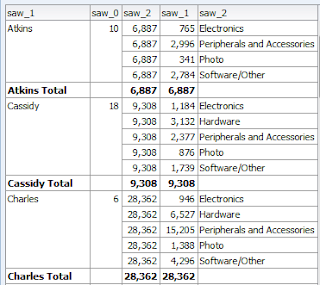 If you prefer to change the names while working with the SQL, and not after the results are ready, you can do it.
In the following example I changed all the saw_X column to natural names. Intentionally I had different names in the external and internal SQL statements. 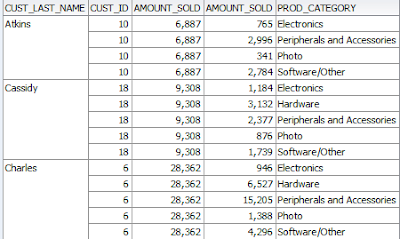 So we learned  OBIEE uses the internal SQL names and disregards the external (for example the first column name is CUST_LAST_NAME and not Cust).
Posted by OBIEE in IL at 12:35 AM 2 comments:

We have a requirement:

1. We need to select offices who sold specific product.

2. Based on this offices list we need to select Revenue of all products ordered by those offices and the percentage of these revenues compared to the total orders per each product.

When I saw the requirement I thought it's native to OBIEE:
All we need is to create an analysis that returns the Offices based on a product prompt: 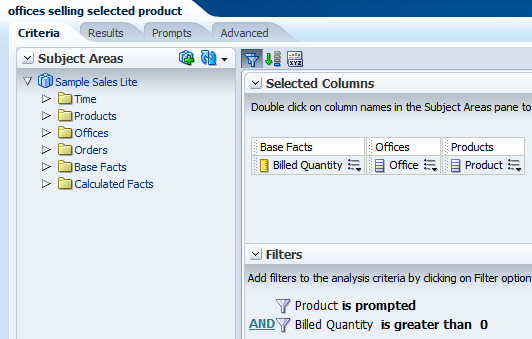 I had a little problem with the second part of the request. What comes naturally in OBIEE is to add those offices as a filter. Something like this: 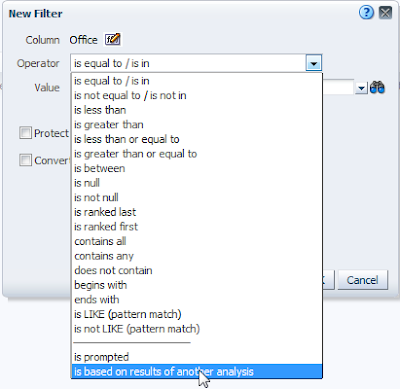 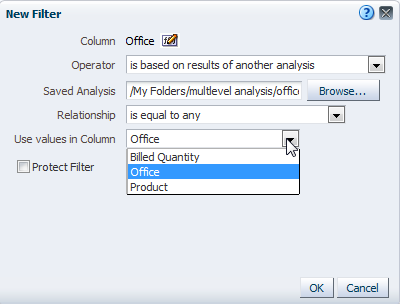 But we had a request to compare it to the total sales of other offices as well.
I started thinking about options:

1. Should we use union all between this select and select with 1 more column of Revenue with all offices without the filter? It works but not elegant.

2. Should we create an external function to return total sales for given product and use Evaluate function?

3. No, there is a native OBIEE way to do it: Just save the above filter and reuse it in a column filter: 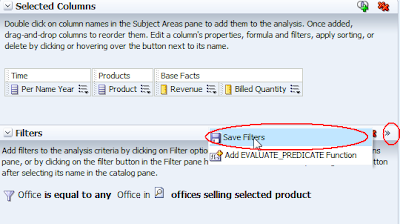 Create the second analysis, and add there 2 Revenue columns. In one of them Edit Formula and Select Filter there 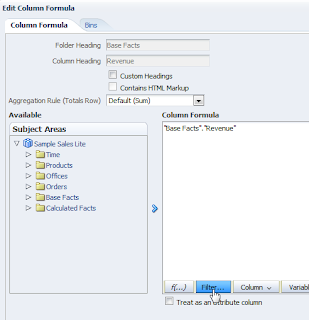 Now in the Filter window just select the saved filter: 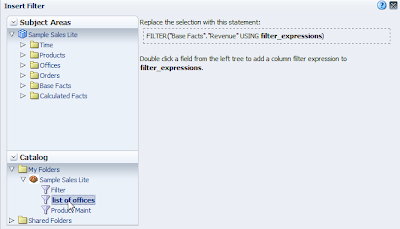 Here we see a little problem:
The formula is:
FILTER("Base Facts"."Revenue" USING ("Offices"."Office" IN (SELECT saw_1 FROM (SELECT "Base Facts"."Billed Quantity" saw_0, "Offices"."Office" saw_1, "Products"."Product" saw_2, DESCRIPTOR_IDOF("Sample Sales Lite"."Products"."Product") saw_3 FROM "Sample Sales Lite" WHERE ("Base Facts"."Billed Quantity" > 0)) nqw_1 )))
(sorry I was a bit lazy and didn't remove unnecessary columns in the first analysis)
There is no trace to the "is prompted" part for the Product !

To fix it we have to change the prompt we created and add an option of setting a Presentation Variable to it: 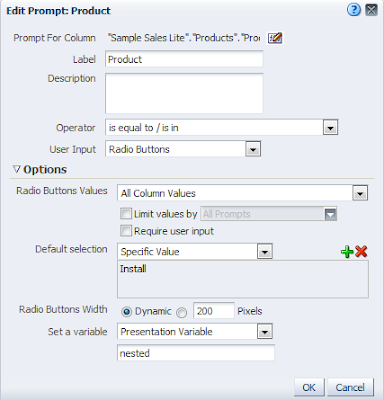 You might (but don't have to, in regular cases) want to replace the is-prompted filter in the first analysis with  "Products"."Product" = ('@{nested}{Maintenance}')

In the second analysis we can manually change the formula to: 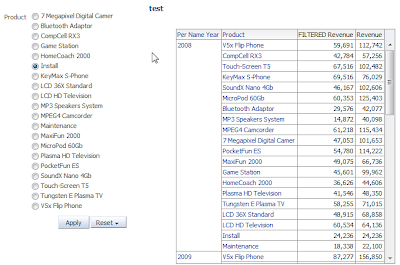 2. If you try to recreate my steps with the Sample Sales, it wouldn't work, because the Product column has "Descriptor ID column" defined in the administration.  So I cheated and the prompt formula was actually: "Products"."Product" || ''
Posted by OBIEE in IL at 4:09 PM No comments:

It's the most updated / latest version (actually patch bundle) of OBIEE, installed on top of the basic 11.1.1.6.0 version.

As usual, the real patch has 7+1 parts. The installation steps for the first 7 are similar. I recommend reading the first readme – patch 16986663 readme file.

The Oracle Business Intelligence 11.1.1.6.12 patchset comprises a number of patches:

Bugs Fixed By This Patch

114705265: CAN'T VIEW A REPORT WHEN DATA SOURCE IS ANSWER SAVED IN THE JAPANESE NAME FOLDER
15937202: DUP BUG 14182507 - COULD NOT LOAD SCHEMA INFORMATION ERROR WHEN USING QUERY BUI
15953794: UNABLE TO DELIVER LARGE FILE VIA SFTP
16297877: APP-FND-02938 MULTI-ORGANIZATION ROUTINE FAILED WHEN SELECT A RESP IN MYACCOUNT
16310357: BI PUBLISHER: REPORTS ARE SCHEDULED TO RUN EVERY 2 WEEKS BUT RUN EVERY WEEK.
16371395: NESTED GROUP CAN NOT BE DISPLAYED CORRECTLY IN EXCEL TEMPLATE
16703527: ANCHOR TWO PIVOT TABLES SO THEY APPPEAR SIDE BY SIDE IN RTF TEMPLATE IS FAILING
16738602: PERMISSION SETTING NOT DISPLAYED PROPERLY IF MOR THAN 31 ROLES
16883295: BI PUBLISHER PARAMETER NAMES TRANSLATION NOT RETAINED ON REPORT REFRESH - TRANSL
16927420: WEBSERVICE API - GETALLSCHEDULEDREPORTHISTORYINFO ALWAYS RETURNS NULL

Known Bugs With This Patch