This post is about using OBIEE 11g Prompts and was created on OBIEE 11.1.1.7. The main intention was to write about "creating 2 prompts on the same column". As background, it also covers how "Is Prompted" works, why do we need the "protect filter" option, as a basics.
At the end there will be few other "prompt related" issues.
I split the post to Part 1, the relevant background and Part 2, creating 2 prompts on same column.

I didn't intend to write about creating 2 prompts on same column, since I was sure it was very well covered by others. Few days ago a business partner (Rotem, enjoy your honeymoon at Galapagos) told me, all she could find were tips guiding her to create 2 copies of the relevant column in RPD and then base the Presentation Variable on them... So I will cover few more options, but first lets ask ourselves why do we need few prompts on the same column?
Few use cases such as:

Lets start with the basic. What happens when we create a Dashboard Prompt?

Column Prompt, "Is Prompted" and "Protect Filter"
As I said, Column Prompt is based on a Real Column or a Formula. When we create a Column Prompt we are required to select a Column. 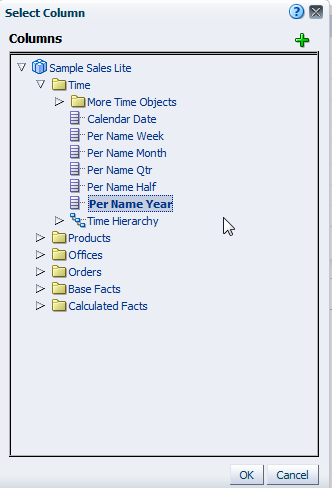 Later we can edit or change the formula: 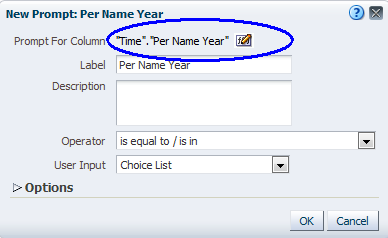 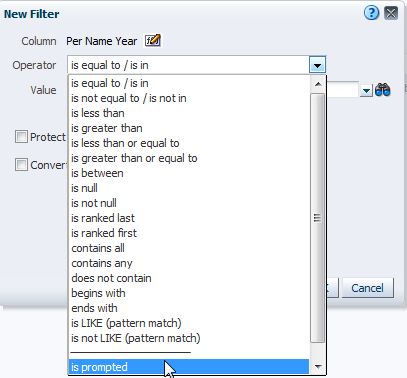 Why do I insist on talking about "formula" and not "column"? Because we can edit the formula both in analysis and in prompts. So, when the formula in both places are the same "the magic" works.

As expected the prompt influences only the first analysis where the formulas are the same: 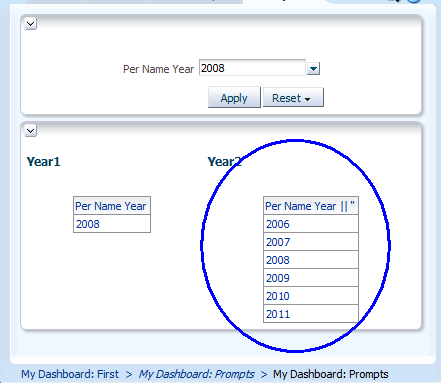 EXAMPLE2: Lets do the same but change the Column Prompt Formula to "Time"."Per Name Year"||'' (the one from Year2 analysis): 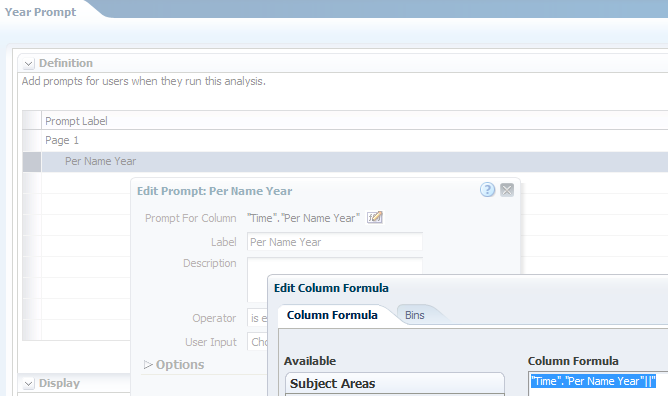 As expected only the Year2 Analysis is influenced by the prompt: 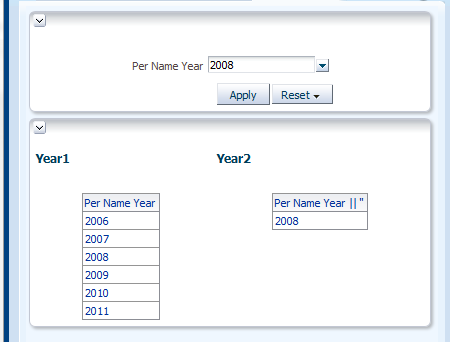 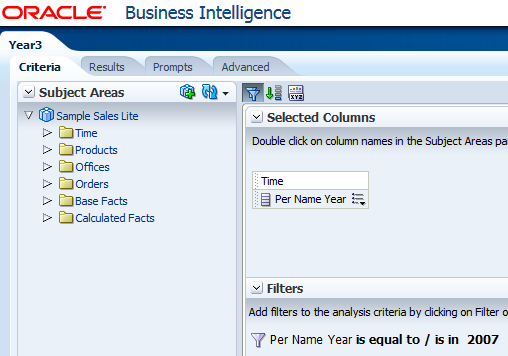 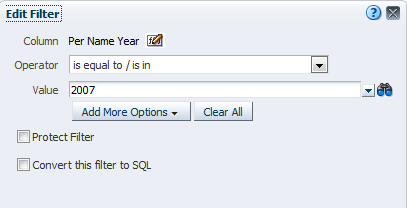 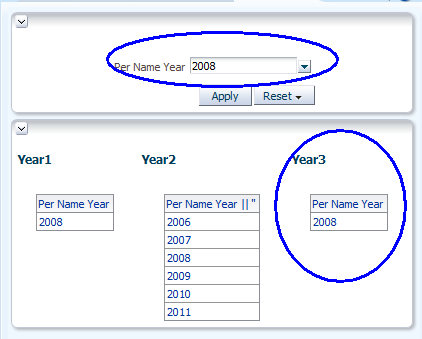 The filter was for 2007, but we see the prompt overpowered it and the analysis return 2008!
Why? OBIEE is somewhat enthusiastic about prompts. Whenever the prompt and filter have the same formula, the prompt is in control. You want to prevent it? Select any of the check boxes in the prompt definition: 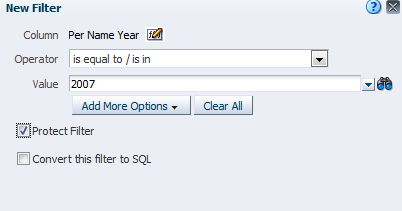 The logical default is "Protect Filter", but "Convert this filter to SQL" will do the trick as well: 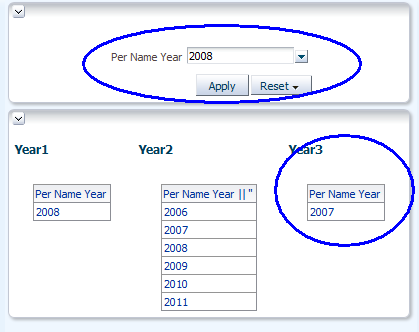 Last part of this OBIEE Prompts 101 part will be, "List Values".
Prompts List Values
By default, in Column Prompt, the default List Values are all the column values, while Variable Prompt has no default selection and you must define it, if you want the user to have values to select from (unless it's plain text).
What are the options?
Both For Column Prompt: 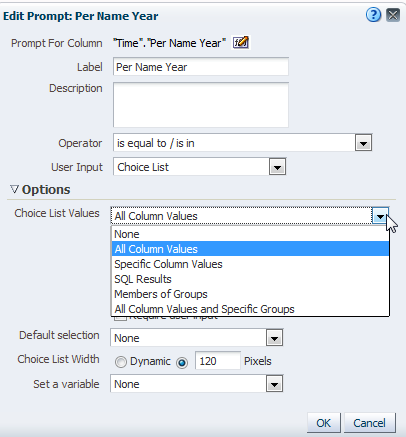 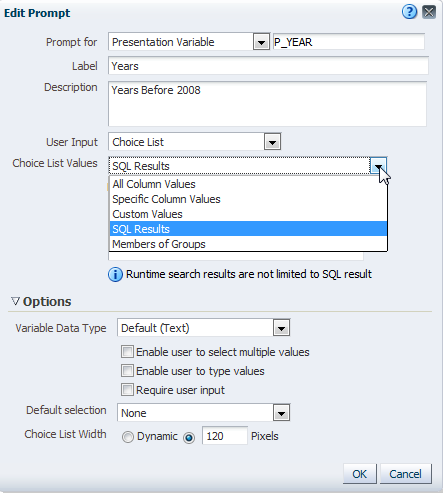 Lets talk about few of them:
All Column Values: The default for Column Prompt. Can be used in Variable Prompt. Then you have to select a specific column. You might ask, "Isn't it what a Column Prompt does?" We will not talk about Groups related option here and most of other are self explanatory, but lets see a very simple (and almost full proof) way to create an SQL Results.
EXAMPLE4: I want the prompt to suggest only Years before 2008. I'll create an Analysis where I select the relevant data: 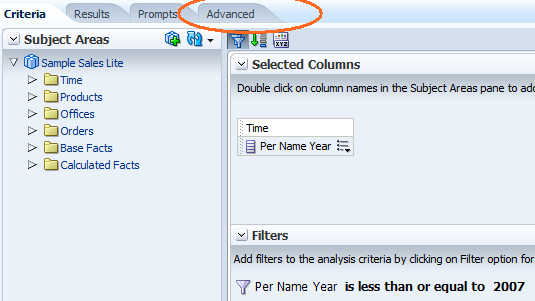 In Advanced Tab we can see the issued SQL. You will see a cleaner version if you press "New Analysis": 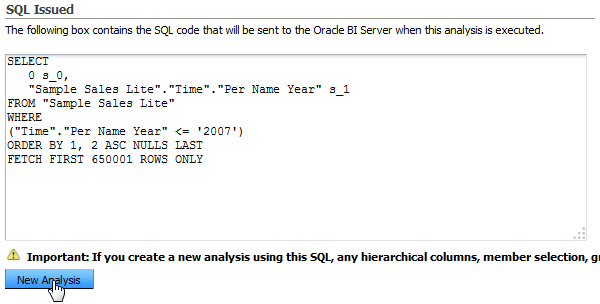 And paste it as the SQL Result: 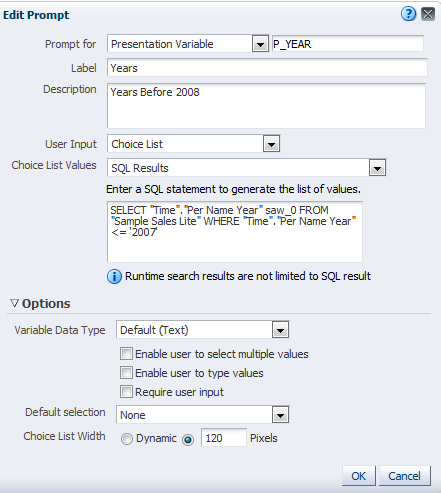 How to create 2 Prompts on Same Column from the above is trivial, but we will see few less trivial examples.