this is the second part of OBIEE 12c Advanced Analytic:


In this post I will talk about 2 functions with similar but somewhat different functionality:  BIN and WIDTH_BUCKET.
Both functions aim is to define the bin / bucket the specific data entry belongs to. User can specify:
The major difference is the different meaning of the BY parameter and the fact that the BIN function result is treated as a Dimension Attribute while WIDTH_BUCKET is not.

The WIDTH_BUCKET itself is one more "secret function", not available in the function menu.
For some reason, the syntax of the 2 functions is different.

More on the difference is available in the documentation :


Note the following differences between the BIN and WIDTH_BUCKET functions:
Simple examples of both functions, then the syntax and few more examples.


I'll use a "sample sales" based analysis With "Product Type", "Month" and "Revenue" columns.

To place the Revenue values into 4 bins based on all the attributes of the analysis, I can get the same results with the following BIN and WIDTH_BUCKET function: 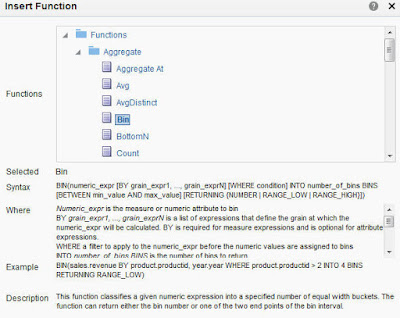 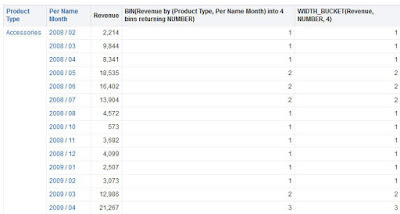 I had to define number of bins (4 in my case) in both functions (or get syntax error).

Few first differences:
The BIN function syntax is consistent with most Advanced Analytics in OBIEE while WIDTH_BUCKET is comma-based.
In BIN function I had to define the BY attributes (since "Revenue" is a measure) while I could omit them in WIDTH_BUCKET and accept the default.

Attempt to omit them in Bin function would cause an error in the Results Tab:

The difference in meaning of BY


Now I will aggregate both functions BY "Month" and will show the different way each function interpretation of the meaning of it: 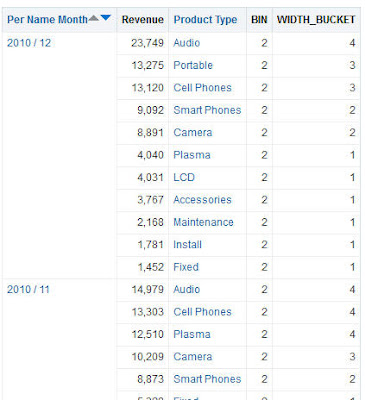 The meaning of BY "Month" in WIDTH_BUCKET is: Take individual rows of data in each month and arrange them in 4 buckets.

To be sure I understand it I asked myself, what would be the result of
WIDTH_BUCKET("Base Facts"."Revenue", NUMBER, 4 by "Products"."Product Type", "Time"."Per Name Month")
Since all the data I have is combinations of the 2 attributes in the BY parameter, the function will return 1 for all the rows. 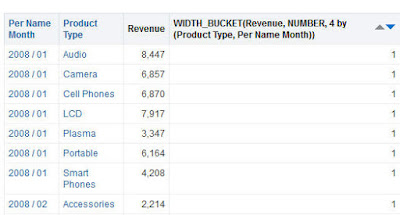 
Before the formal syntax, what does the NUMBER parameter stands for in both functions?
It declares what the function should return. The Bin/Bucket number or the lower or the high value of the Bin/Bucket interval. The Possible values are: NUMBER, RANGE_LOW, RANGE_HIGH. we can have only one in each function. Here is the fist example with 3 WIDTH_BUCKET functions, each with a different Returning parameter:

The Syntax of BIN:


Where:
numeric_expr indicates the measure or numeric attribute to bin.
NUMBER indicated that the return value should be the bin number (for example, 1, 2, 3, 4). This is the default condition.
RANGE_LOW indicates the lower value of the bin interval.
RANGE_HIGH indicates the higher value of the bin interval.
number_of_bins indicates the number of bins to return. The default is 10.
min_value, max_value indicates the minimum and maximum values used for the end points of the outermost bins. If the min_value and max_value conditions are omitted, then the function determines the end points automatically
BY expr1, ..., exprN indicates an optional list of expressions that define the groups in the query result set over which the WIDTH_BUCKET calculation is applied. The bucket intervals within different groups are calculated independently.


From the syntax we can see both functions have parameters (min_value, max_value) to exclude outermost points, if so desired.

The "where" example of BIN function:


I'll use the following function: 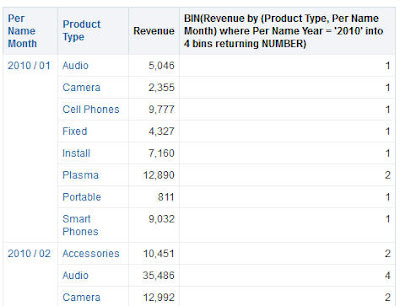 You can't see it in the picture, but as a result the data of the entire analysis is filtered to the Year 2010, since BIN has NULL values for any data that is not 2010. Turning on the "Include rows with Null values" option in the table properties would also return data with Null values in Revenue column. 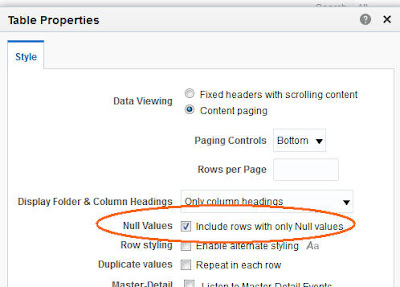